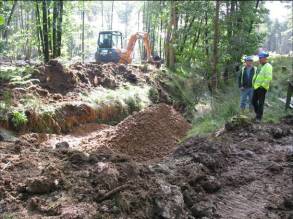 River restoration has become a standard part of a river manager’s repertoire as European, North American and Australasian land managers have increasingly moved away from a focus on efficient drainage of land and rivers and towards a more holistic view of rivers in the landscape. River restoration is a strange beast though. I’ve found the more work I’ve done with and within river restoration the less I understand it. I was originally going to write a short piece about my take on restoration, but I’ve come to realise it makes more sense as a short series of posts each tackling a different related issue.

Rather than start by looking at what restoration is I think it is more instructive to examine why we bother in the first place!

A US study listed the most commonly cited objectives of river restoration as; i) enhance water quality, ii) manage the riparian zone, iii) improve in-stream habitats, iv) improve fish-passage and v) stabilise river banks. I suspect in the UK this would not be radically different. Recent legislative pressure to improve ecological and/or water quality standards such as the Water Framework Directive (EU) and the older Clean Water Act and Water Quality Act (US) are often cited as reasons for embarking upon some sort of restoration whilst not necessarily leading the end project design.

However this still doesn’t tell us a lot about why. If we break it down we must logically have river(s) that someone believes are degraded below their potential in some area(s), furthermore there has to be a belief that not only can these rivers be moved towards their potential, but that this is possible by some form of human endeavour. When we examine this concept of degradation further it leads to the concept of ecosystem services. If we look back at the cited objectives of US projects above they are all about the river failing to provide some benefit (either directly or indirectly) to humans. There remains the lofty ideal of acting as responsible stewards of the planet and trying to reverse harm previously done by man to the natural environment, but at the risk of appearing cynical I feel this is a weak argument, which when examined/challenged always leads back to measurable improvements to factors important to human stakeholders.

Although there are examples of river restoration projects done as scientific experiments with little or no stakeholder involvement these are very rare. Whoever the primary advocates/ managers of a project are fundamentally river restoration projects cannot gain backing unless the stakeholders perceive the environment to no longer deliver the ecosystem services they want, or need from it and that there is scope to improve this situation.

There are some drivers which are fairly simple to understand; improving fishing stock and improving services related to farming spring to mind. Services related to the social and recreational use of rivers are the most complex and divisive driver to pick apart however. There are as many interests as there are people who live by, use and generally love rivers. The result of these (often conflicting) interests is that river restoration is more politics than science. A new phenomenon is active campaign groups fighting to resist restoration taking place, some of these groups make good scientific and social points, and the fact they exist demonstrates a failure to appreciate the political and social component of restoration. However it is hard to escape the feeling that some opposition is driven by NIMBYism. For some the river (however degraded or modified) does meet their personal expectations regarding ecosystem services (often just being picturesque) so there is no mandate with them for any changes.

If there are people who feel that restoration is unnecessary and potentially harmful, the logical response is that we need to more effectively communicate the scientific evidence (and target future studies) to enable river managers to plan and execute better projects and to facilitate understanding in the wider public. The relationship between restoration and science has historically been a fragmented one (again something I’ll explore in a later post), but I suspect that often the problems with understanding restoration has parallels with climate change. It may be that this is not a case of needing to get more and better science, communicated in clear and unambiguous ways, rather some people who campaign against river restoration projects are not doing so from a position where they have an open mind to new information, so much as an entrenched position from which there cannot be a finite weight of evidence needed to shift their thinking. That is to say it doesn’t matter what studies are conducted and how they are communicated, these people will not change their minds.

This is a rather depressing fact to consider, but I think it important to recognise for anyone involved in a restoration project. Such opposition can sink a project so it is vital to identify where stakeholder groups need to be involved at an early stage. Although not everyone will be prepared to listen I still firmly believe we need to approach (and monitor) restoration using the scientific method and communicate this to stakeholders. Most importantly the aims of the restoration; why it is being done need to clear and be front and centre of any communication. Too often the message is one of complying with the WFD, increasing biodiversity or restoring “naturalness”, which are outcomes not reasons in themselves to conduct a restoration project.

4 Responses to Why Restore?